This is the first of a set of emails from December 2004 describing my 3-week tour of the country on Amtrak. Stops on this tour included LA, Orlando, New York and Chicago.

So what am I doing, and why?

I am on my sabbatical. PalmSource is one of those few companies that still grants them. In PalmSource’s case, employees qualify for a four-week sabbatical after having been at the company for four years. As I approached that milestone (at the end of last August), I was planning not to wait very long, perhaps going in October. But the more I thought about it, and the more I talked to other people, I came to realize that if I slotted it in between Thanksgiving and Christmas, I could extend the time off to just shy of six full weeks. This is because PalmSource schedules as holidays the two days of Thanksgiving, one day for Christmas eve, and the full week between Christmas and New Year’s. There being 19 work days between Thanksgiving and Christmas eve, my sabbatical officially began the day before Thanksgiving (the 24th). I return to work on Monday, January 3rd.

That’s a lot of paid time off. My kids are off for part of it: they had the Thanksgiving break, of course, and they get the weeks before and after Christmas. The rest of the time, though, they have to go to school, so traveling with my family between Thanksgiving and Christmas is out. And really, a sabbatical should be a time for reflection and the recharging of ones mental batteries. So after some serious conversations with Nancy, I settled on taking a three week train trip around the country. This is probably as close as I’ll get, for many years at least, to something that people used to do, the “grand tour.”

Our recent Canadian train trip to celebrate my folk’s 50th wedding anniversary was what got me thinking about trains. Previously I had been thinking about taking a driving trip, traveling around various parts of the country in the Porsche. But given the time of year I’ve chosen to take the sabbatical, driving a convertible probably doesn’t make a whole lot of sense. And Nancy certainly was a lot more comfortable with the idea of my taking the train… 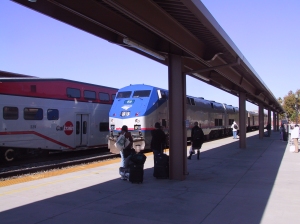 I know that Amtrak isn’t exactly the Royal Canadian Pacific: that train was a luxurious experience like no other. However, purchasing sleeping accommodations on an Amtrak train puts you in the category of first-class passenger, and first class passengers do get some nice perks. For instance, you get a daily paper and free meals, and your sleeping car porter will even deliver your meals to your compartment, if you so desire. There is a parlor car—with swiveling easy chairs, couches, tables, a bar and, downstairs, a small theater—exclusively for first-class passengers. On the Coast Starlight (which travels up and down the west coast, from Seattle to Los Angeles), first class passengers can enjoy a daily wine tasting. Finally, in some of the bigger stations (New York’s Penn Station and Chicago’s Union Station, in particular) there is a special lounge for first-class passengers similar to what you find in some airports. There you get free food and drinks, and apparently there is WiFi Internet access.

I didn’t get rooms on the trains for the first-class treatment; it was the thought of spending some eight nights on trains sleeping in a chair in a coach compartment that caused me to book rooms. I hadn’t really thought about the first class perks at all, actually, until I was sitting in the San Jose train station waiting for the southbound Coast Starlight. That train makes the run from San Jose to Los Angeles in a single day (11 hours), arriving in LA at 9:00pm. Because I wasn’t going to be sleeping on the train, I had purchased a coach-class ticket. But the train was running late, and waiting in the station Nancy and I got to talking. I read about the perks that first class passengers received, and the wine tasting sounded like an awfully civilized thing to do. I was somewhat hesitant, but Nancy talked me into approaching the ticket agent to see about an upgrade. The agent thought it would be awfully expensive, but he ran me a quote. He was really surprised to learn that it would only cost about $125 to put me in a roomette (a small sleeping compartment). That sounded reasonable enough to me, and I figured, what’s another $125 on top of what this trip is already costing? I was then very pleased to learn that $125 wasn’t the upgrade price, that was the total price. I had already paid $45 for the coach class ticket, so the upgrade was only $80 more. Needless to say, I whipped out my credit card and upgraded. And boy, am I glad I did. The parlor car was very nice, the wine tasting was truly a lot of fun, and being the introvert that I am it was wonderful to have a private compartment to retreat to. Even though I didn’t sleep there, it was sure nice having a space of my own for the day. And it was a long day, as it turned out…

I put the first photos of the trip up on my website. Unfortunately because the train was running late a good portion of the trip was in the dark, and so photos (both inside and outside of the train) were tough. But hey, it’s a start… Check ’em out at [website deleted].

I’ll be sending out periodic updates on my trip, whenever I get to somewhere with Internet access (the hotels I’ve booked into all have it). Unfortunately I don’t have access from the trains, so the next “dispatch” will be sent from Orlando. I’ll provide a description of both the San Jose-to-Los Angeles train trip, and the Los Angeles-to-Orlando train trip.